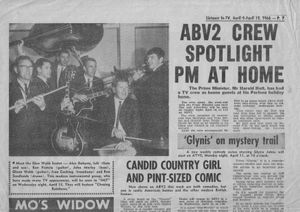 The Glenn Webb Sextet was a Jazz group formed in 1966 by James (Glenn) Webb at the behest of the Musicians' Union to promote Melbourne's professional music scene. The Sextet performed regularly on Graham Kennedy's "In Melbourne Tonight" which was broadcast on Melbourne's GTV Channel 9. The accompanying music track was recorded during one such broadcast.
The newspaper is the "Listener In-TV", published by The Herald and Weekly Times. It was Melbourne's bible of media reporting at the time.
0:00/???